The Art Deco style is eclectic and inspired a great deal of design during the early part of the twentieth century, including architecture, interior design, fashion, jewellery and film.

Coined in 1966, the term Art Deco refers to the style that was popular during the 1920s until the Second World War period. Features of this style include geometric and angular shapes, bold contrasts and colours, lots of chrome, mirrors and shiny fabrics – which is why Art Deco buildings are so memorable and distinctive even today. 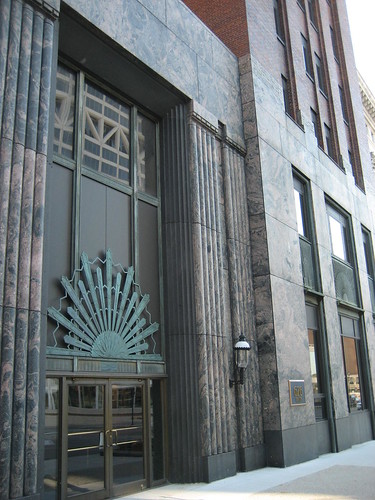 Often the materials used in Art Deco buildings include aluminium and stainless steel, as architects tended to embrace the machine age to add futuristic elements to their designs. However, as with any style there were numerous sources of inspiration which is why buildings vary so widely. Often patterns were taken from around the world and from throughout history, including the Far East, ancient Greece and Rome, Africa, India and Aztec cultures.

Symbolic images were often included on building designs, such as birds and machine gears. And the Art Deco style was applied to buildings of all types, from skyscrapers to gas stations to residential homes. This is illustrated in the 6 famous Art Deco buildings below.

This was built between 1928 and 1930, and for a few months the Chrysler Building was the tallest structure in the world. William Van Alen, the architect, was inspired by machine technology and included features such as hubcaps and abstract images of cars on the building. The Chrysler was one of the first buildings to be made of stainless steel over a big exposed area.

Constructed in 1931, when it was built it was the tallest building in the world and remained so until 1972 when the World Trade Centre’s North Tower was built. Following the September 11th terrorist attacks in 2001, the Empire State Building became the tallest building in New York, only to be ousted of this top spot by the construction of the One World Trade Centre in 2012. The building has a tiered design that includes an observation deck.  It is still considered a popular and original New York landmark,
bringing visitors year round.   There are also a variety of New York hotels nearby the Empire State building; visitors can have a look at this site for tourist information.

Built in 1936 along the historic Route 66 highway, this construction was designed by JC Berry who was inspired by the image of a nail stuck in dirt. Features include two towers and glazed ceramic tile walls, and the inn stayed open for business until the late 1990s.

Inspired by buildings he’d seen in America, Gilbert Scott designed Battersea Power Station in 1930-34. Originally, there was one 300ft tower at each end but the building was later doubled in size to create the four towers of today.

This Grade II listed building was designed by Sir Owen Williams in 1936, and is considered the best of the three Express Buildings he designed. With a unique look including lots of opaque glass, this building was very radical at the time and is often mistaken for being younger than it is because of its modern lines.

This big building was constructed in 1940-43 in the Art Deco style by architect Percy Edgar Everett, and shares similarities with the Empire State Building design.